The RetroUsb AVS and the Analogue NT Mini Noir 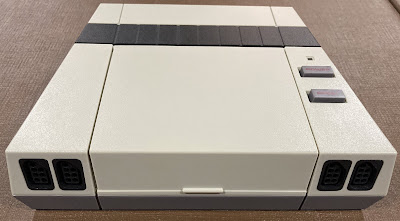 The RetroUSB AVS is a modern clone console of a Nintendo Entertainment System, featuring an FPGA (field programmable gate array) chip that could simulate console hardware in real time with no lag. My RGB-modded NES top loader was OK for use on CRTs, but it displayed all sorts of jailbars and artifacts on screen when piped through my OSSC onto my HDTV. I was looking for a cleaner solution, so I decided to pick one up.

The AVS (an acronym for  Advanced Video System, the rejected name for what is known as the Nintendo Entertainment System) is a fantastic modern clone console. It has slots for both North American NES cartridges, as well as the Japanese Famicom carts. It also has an expansion port for use with the Japanese Famicom Disk System, if you have one. Video output is 720p, via HDMI. The picture is sharp and clean, and with the recent firmware update, now includes interpolation as an option to smooth out the image further and remove pixel shimmering when the screen scrolls. The proper aspect ratio is subject to interpretation, and can be adjusted to your liking. Four controller ports are built in, and the power and reset buttons are identical to those on an original NES. The cartridge slot does have a firm grip, and it takes much shimmying to wiggle a cart out – this would be referred to as a death grip but I think thats exaggerating a bit. It does read carts reliably, not really requiring much reseating or scrubbing of contact pins.

I was very happy with my AVS for years. Then, Analogue announced that they would be releasing another batch of their premium NT Mini consoles, in a limited number. The NT Mini was the first FPGA NES clone, engineered by the legendary programmer known as Kevtris. This would be the be-all end-all of NES clones, sparing no expense and costing a whopping $500. The body of the console is machined aluminum, which is where most of the cost comes from. Functionally, it outputs 720p and 1080p, and has an onboard digitial-audio converter (DAC) that enables analog output to CRTs as well in the form of composite, RGB, S-video, and component. Essentially, every kind of output signal is provided. Four controller ports are built in as well. This is the Cadillac of NES clones, and a limited number of people would have the privilege of paying that much for it. I placed my preorder, and waited.

When the NT Mini Noir arrived, first impressions matched expectations. The build quality is unlike anything the video game market has ever seen. The weight, build, and packaging all exude quality. The clear bottom proudly exposes the clean circuitry of the motherboard, and the gun metal aluminum screams exclusivity. The cartridge flaps make a satisfying “clink” when released, and they are present on both the NES and Famicom slots. The operating system presents a much more robust set of options when compared to the AVS. Not only are there more video output options, but the customizability for each characteristic of the video and audio signals is dazzling. Youtube videos have been made just to explain how to dial in the various ideal settings that are possible.

It sounds like a perfect console so far, but there are a few drawbacks to mention. The design of the NT Mini is such that is has a low profile, so that means the cartridge slots have almost no depth. From afar this doesn’t seem like a problem, and whether it is one is debatable. Because the slots are so shallow, there is a certain amount of wobble once carts are inserted. This amount of play in the seated position potentially leads to games glitching or resetting if the console or table is bumped. In practice, this is overstated, and how many people are bumping their entertainment centers while playing? For me, the biggest drawback is something else. The games need to be pristinely clean in order to play correctly. I mean, clean with a mirror shine. I understand that as adults we are taking care of our games better now that we did as kids, and I generally clean my games when I think that there’s a chance of introducing dirt or grime into my console. But the NT Mini has next-level pickiness about how clean the cart should be in order to run. I keep my NES carts in air tight Bit-Boxes (from Stoneagegamer.com), and I still have to scrub each one no less than two times, sometimes more. It was adding more frustration to the process of playing games than I was willing to tolerate. So I decided to unhook my NT Mini and reinstate the AVS.

It is true that the NT Mini outputs 1080p, a higher resolution than the AVS at 720p. This is a difference that can be noticed if you scrutinize for it. However, fans of scanlines like myself will tell you that scanlines do not present well in 1080p, and become uneven. In 720p, which is a multiple of the NES native 240p resolution, the scanlines are very regular with even width, presenting very naturally. When people want to set scanlines on HD systems, a common fix is to reduce the resolution to 720p. It’s a personal preference.

I think a lot of the appeal and value of the Analogue systems comes in the ability to jailbreak them with unofficial firmware, and side load the roms so cartridges aren’t needed at all. In the case of the Mini, the jailbreak firmware includes a dozen or so cores that allow for access to entire libraries, like Gameboy, Gameboy Color, Coleco, Atari, and many others. The fact that all of the games from all of these systems can be played on one console, with FPGA quality is a major selling point. I do believe that many people buy the NT Mini for this very reason, which is fair. I gave the jailbreak firmware a test drive, and it was fine, but I didn’t buy the console with those systems in mind, so personally for me it was a wash. If one is  buying consoles just for the ability to play a multitude of roms for a multitude of systems, then I think the MISTer FPGA project is a better/cheaper option. I reviewed the MISTer here.

While the NT Mini is all about the premium aesthetic, the AVS channels the NES, from its coloration to its identical buttons. The simplicity of it is unassuming. It is also only $185, compared to the $500 for the Mini. The Mini is very sheik, with its aluminum housing feeling like an unnecessary premium. It is little over the top with the amount options. Added features aside, the cost difference is not to be ignored. Yes you are getting every feature that is currently possible, but will you use every feature? Do you need the extra four types of analog video output? Will you play all of the other cores once jailbroken? It is easy to be seduced by the accoutrements. What I hear is many people clamoring for is an Analogue NES console more in line with the Super NT (FPGA Super Nintendo) or Mega SG (FPGA Genesis), which are perfectly functional HDMI clones that are priced just under $200. These would fit the market space better, make a killing, and would probably sell more that all the others combined. Maybe Analogue does have that planned, and are first milking the people willing to shell out half a G for the NT Mini first, before releasing a mass produced $200 model eventually. If they do, great, but so far I’m super happy with my AVS.

What are your thoughts? Do you have one or both? Do you feel the premium price for the NT Mini is worth it? I am curious to hear other opinions.